My fascination with birds started with the ostrich farm my mom and I lived above for a few months when I was a girl. Every morning I’d go downstairs, and one of the workers would put a little apron around my waist, and send me into the corral to feed the birds. I would disappear into the herd, my head reaching their wings, enveloped by the rustle of feathers.

We also had a blue-and-gold macaw named Candelario while we lived there. He’d cuddle in bed with us, and drink wine from her glass. I have a short written about this if anyone wants to help me tackle filming on an ostrich farm and securing a trained blue-and-gold macaw.

I once suggested my brother follow his father’s boyhood ritual for courage, and eat the heart of a hummingbird. Chris’s dad is from Honduras, and to gain courage, he’d take a slingshot into the forest, knock a hummingbird out of the sky, cut it open and eat the still- beating heart. Chris commissioned a taxi driver while he was in Honduras, and did it. In my defense, I didn’t think he’d actually do it.

But my strangest brush with birds happened around the time I had to read Haruki Murakami’s, Kafka on the Shore for a lit class. It was the first of Murakami’s work I’d ever read, and it fascinated me. In typical Murakami fashion, it’s convoluted, strange, and doesn’t really have an ending. Like this blog post!

But just before the start of summer, I went out on a date with a very cute boy from my history class, and he took me to Sunken City in San Pedro. It was hit with a landslide in 1929, so there’s chunks of concrete everywhere, clothed in graffiti. I’d brought little speakers, so we listened to music, walked along the coast, and talked. Then he pointed to something in the ocean, just beyond the rocks. A black mass was caught in the tide, and it was alive. 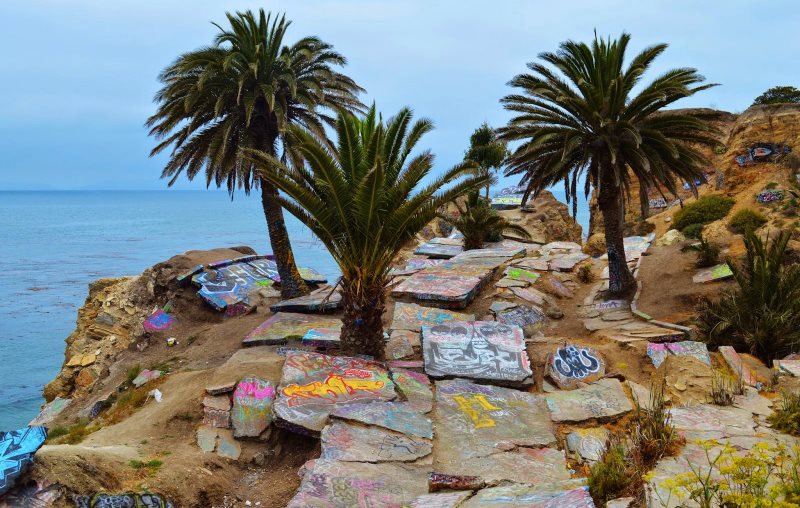 I left him on the sand while I went in. I jumped from rock to rock to get a closer look. Over the sound of the waves crashing, I heard a murder of crows overhead.

A crow was drowning in the ocean. I watched a wave take him, lift him, almost like he was flying, and then he was splayed on his back, on the same rock I was standing on. I didn’t want to touch him. I looked at my date, shrugged, and took off my shirt. I picked him up like a newborn baby. He was huge. I held him, and the tips of his wings reached my elbows. And he was heavy; my hands had to adjust to his breathing. With every inhale and exhale, water seeped out.

I got us back to shore. In my bra, holding a dying crow, on a first date. I laid him on a rock in the sun. The ocean is a beautiful, tiring place, and my crow was beautiful and tired. We put Simon and Garfunkel on, I think it was “Scarborough Fair,” and sat with him for a while. While the murder circled overhead, one crow stood watch on the cliff.  He stuck his beak into the side of the mountainside, again and again, heaping beakfuls of dirt upon the scene. It was an odd funeral.

“Even chance meetings are the result of karma… things in life are fated by our previous lives. That even in the smallest events there’s no such thing as coincidence.”
―Haruki Murakami, Kafka on the Shore

Have I googled the spiritual meaning of crows? Okay, yes. Apparently, they’re harbingers to the afterlife (greeeaaaaat), and possessors of ancient wisdom (I recently realized I forgot to renew my car registration, and had been rolling around with expired tags for 6 months). Scientists have studied them, and they’re crazy smart. They can use tools, plan their days, remember human faces.

A week later, I finished Kafka on the Shore. I almost threw the book across the room when Murakami explains “kafka” means “crow” in Czech.

I mean, what the fuuuuck.

I don’t know what any of it means. Why I left a crow on the shore a week before finishing a book with the same title. We live in a mysterious world, and I’m just here to write about it.

Writer. Poet. Aquarius. Catch me in the Winter issue of skyislandjournal.com View all posts by bgoldenwrites